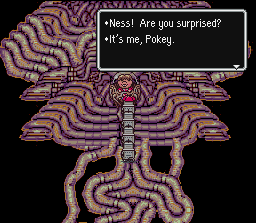 I’ve already done a post on one of Earthbound’s more interesting areas in a previous post but as of last week I have officially beaten the game itself. So before I go any further and I encourage anybody who wasn’t beaten Earthbound to skip this Level Select Thursday because this is something you don’t want anybody to spoil for you. I’m not even sure I can accurately comprehend of what took place. I’ve played and finished a lot of games and I can proudly say that the final area for Earthbound is perhaps the most unique final levels/bosses I have ever seen in a video game. So I bring you my experience against pure evil itself.

Earthbound has some insanely catchy tunes, and they aren’t the creepy or haunting ones either. I’ll go are as to say that they rival some of Nintendo’s more popular franchises from a musical perspective. I’ve said earlier that there were some haunting melodies and themes in the early portion of the game, none of that compares to the final area. There isn’t any music at all, it’s simply sound and it personally made me feel unnerved and not welcomed. Death could be around any corner and all the bosses I defeated prior to here felt insignificant.

The actual music while you fight Giygas is the stuff of nightmares, I kid you not. It’s not music at all it’s simply odd sounds and a vague breathing noise at the beginning. I was terrified from the second the fight started, I could only imagine playing this game at 10 years old or younger. Also don’t simply listen to it off Youtube it doesn’t do it justice. Play the game yourself.

The actual area itself is equally unnerving as well. Earthbound uses the thousands of colors that the SNES was famous for and I love the different color pallets the developers used for each area. That all goes out the window with everything being empty and white. Now that doesn’t seem white, but the white is a muted white color with more emphasis on the shadows itself. It gives the player a more impending sense of gloom, rather than the typical trope of getting the player hyped up to finish the game. I enjoyed that this was reversed.

So the battle with Giygas is perhaps the creepiest bosses I have ever encountered. I have heard about this boss for years and nothing can replicate this experience. While Giygas isn’t the hardest boss you will face (in fact he’s pretty easy once see the obvious pattern) It’s what Giygas says his reaction to what you do. The final nail in the coffin was the fact that it’s not Ness, Paula, Jeff, or Poo who save the world but it’s in fact YOU the player who gives our four heroes the final push to defeat evil itself. In other words, the player saved the world not the four main heroes. I nearly lost it when I came to that realization and thought it was perhaps the coolest idea and it was executed to perfection.

Every one who considers themselves a gamer should at least try Earthbound at least once. No other game can rival the atmosphere or the general reversal of tone. Earthbound is truly one game for the ages.

The Secret Life of Pandas

I've tripped going up stairs, but hasn't everyone? No? Oh.

Kickin' all sorts of Asgard!!

While he gropes himself with eunuch fists, I sow my sole into his teeth and finger him for cash.